Looking Past the Behaviour During Sibling Conflict 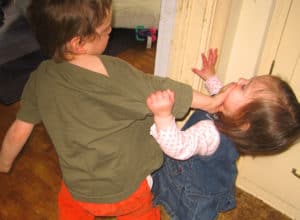 It’s a scene almost any parent of more than one child knows well: you’ve just broken up yet another sibling conflict. One child is crying, complaining through the sobs that their sibling hit them. Your other child is standing nearby, defiantly explaining their grievances. Both of them are waiting for you to do something.

What do you do?

Do you comfort the crying child, and ignore the “instigator”, to show that you will not reward aggressive behaviour with parental attention?

Do you immediately discipline the child who hit their sibling, to show that people who hit others get swift, firm consequences, and to demonstrate to the child who was hit that it’s not okay for people to physically attack them?

Do you insist on an apology for hitting?

Do you send one or both kids to time out?

Do you sit them down and try to get them to talk through the situation, to teach them how to resolve conflict?

Neuroscience suggests that, in the heat of the moment, none of these approaches is going to be effective in teaching your children. In that moment of intense conflict, your children’s “survival brains” are on high alert. The conflict activated the primitive fight-or-flight survival response; the part of their brain responsible for keeping them safe interpreted the situation as a possible survival threat and took charge.

This means the neocortex (the part of the brain responsible for reasoning, learning, and regulating impulses) is no longer running the show!

You may still be able to have a conversation with a child in this state, but you’ll mostly be talking to the “survival brain”. You may be able to elicit a reluctant apology, but it won’t be coming from a place where the child has thoughtfully considered the situation, recognized that they could have handled it differently, and felt remorse. You can impose a consequence, or deliver a swift punishment, or insist that the children “talk it out”, but that will likely add more stress, pushing a child further into the fight-or-flight survival response.

Ultimately, a child whose “thinking brain” is not in charge is unlikely to learn anything meaningful from these types of parental responses.

What does the child’s brain need in the moment?

Understanding what is happening in both children’s brains in that moment means that instead of trying to react swiftly and decisively to “address the behaviour”, your focus should be soothing the brain, so you can get that neocortex – the “thinking brain” – back online. In whatever way makes the most sense for your child, in the words of Dr. Ross Greene, your priority is to “defuse and de-escalate”.

And here are some ideas to ensure that you stay calm, too, rather than getting swept up in your own “survival brain” response.

Don’t get me wrong – the situation that led to the conflict needs to be addressed. I’m not suggesting you sweep these issues under the rug. But the conflict resolution can happen later on, when everyone’s “survival brain” has been calmed.

If you’d like to learn more about what’s going on in your child’s brain during these intense moments, take a look at Dr. Stuart Shanker’s book Self-Reg.